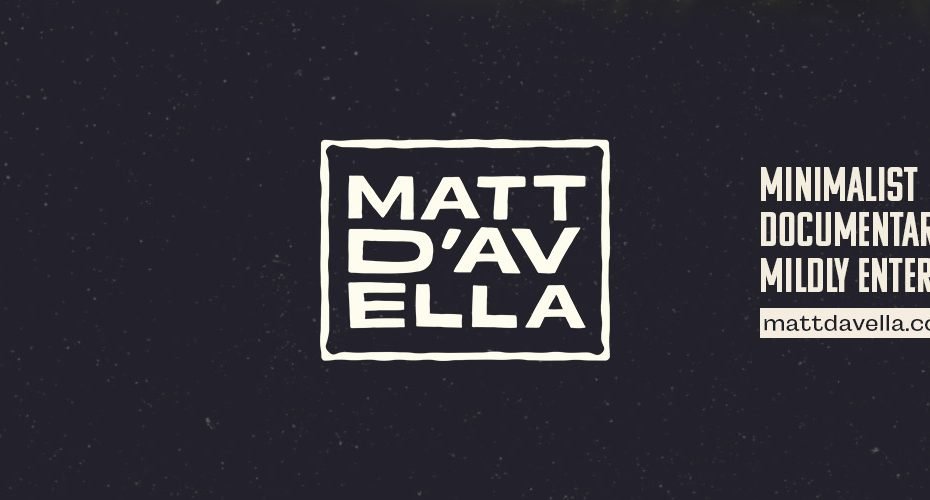 Preface: This week I am doing something very different. I came across an interview with filmmaker, Matt D’Avella, about the stress of constantly creating content. He articulates this so well that I feel it best just to share the introduction of the interview. I encourage you to read the entire piece.

Everyone wants a successful YouTube channel, but very few people talk about how to keep it once you build it. Matt D’Avella had to figure that out for himself.

He’s a documentary filmmaker and YouTuber with 3 million subscribers who covers minimalism, habits, and productivity. He started out by releasing one video a week—and soon his numbers started to pick up. It was exhilarating at first: he never expected his videos to get so popular so quickly. When they did, what started out as a fun outlet for creative expression soon became something entirely different.

Matt wanted to make sure that his channel growth didn’t stop and that his existing subscribers stuck around. So he doubled down on doing exactly what he’d been doing from the start: continue releasing one video a week, and trying to make each one as popular as possible.

Creators everywhere feel the same way: YouTubers, newsletter writers, streamers. It’s the same problem in different forms. I’ve felt it firsthand with this newsletter. You start doing something because you love it—and when it starts to work, it introduces a whole set of complications that can take you away from the thing you loved about it in the first place.

If you’re not careful, you’ll hit burnout quickly. And that’s exactly where Matt found himself: making videos at a relentless pace, and never satisfied with the numbers. “You’re always in hyper comparison mode against yourself—and you can never win, because you’re rarely going to beat your best video.”

In the rest of this interview, we go through the systems and processes Matt uses to keep his channel growing without burning out. We go into everything from how he sets goals, to how he does his email, to the habit that changed his life.

Dan Shipper is an entrepreneur, writer, and the co-founder and CEO of Every, a bundle of business-focused newsletters, founded in 2020. Find him on Twitter: @danshipper. This post was co-written by Dan and Kieran O’Hare.